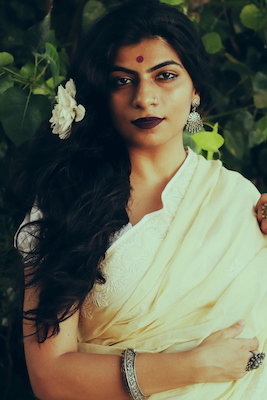 Shreya Ila Anasuya is a writer of fiction and creative non-fiction, an independent journalist, and the managing editor of Skin Stories, a digital publication on sexuality and disability.

Shreya’s fiction focuses on myth and memory, and has been recognised with the Toto Award for Creative Writing in English and a Sangam House Residency.

Her journalism, which focuses on human rights and culture, has appeared nationally and internationally, and has been recognised with three Laadli Media Awards as well as the South Asia Laadli Fellowship.

Skin Stories, housed at the non-profit Point of View, has been recognised with two awards, is used by organisations such as Amnesty UK as a resource, and is taught in several university classrooms around the world. It has also been published as an anthology of essays, which has been called “a landmark contribution to the growing discourse around sexuality, gender and disability” by The Hindu Business Line.

Shreya has worked as a researcher on gender, welfare and surveillance with the Center for Internet and Society, and served as a rapporteur for global dialogues on making a feminist internet and the intersection between reproductive rights and disability justice.

She is the narrator of the musical theatre show ‘Gul’, based on her short story of the same name.